The Agency (機関, Kikan), translated as The Organization in the anime, is an organization of espers. The 'Agency' believes they were converted by Haruhi Suzumiya into espers in year 0, and given special knowledge about their purpose.

They also work to keep Haruhi mentally stable, which would prevent these outbreaks. They discerned ordinary human Kyon to be a "mental tranquilizer" for Haruhi.

Much of the 'Agency' believes Haruhi to be a god, believing she had created (or recreated) the current world four years previously, including the invention of time travelers and aliens, although some members, like Koizumi, believe this is false, as Haruhi exists in "this" world but is not aware of her powers. The belief that Haruhi is a god also contradicts statements by members of allied organizations such as time traveler Mikuru Asahina and alien Yuki Nagato. Some members of the 'Agency' don't believe that Mikuru is a time traveler or that Nagato is an alien, in fact.

At around the same time the 'Agency' formed, a "rival" group formed, including people such as Kyouko Tachibana. Her group firmly believed that their powers had, in fact, come from Sasaki, a woman the same age as Haruhi. Conflict broke out between the two groups, and despite numerous meetings neither could convince the other side. The rivals believe that the powers were accidentally transferred to Suzumiya, and eventually worked toward transferring those powers back.

The 'Agency' has at least partial ownership of the hospital that Kyon recovered in due to the events of The Disappearance and has the ability to put people under constant surveillance. By The Surprise they had not yet done so to Kuyou Suou, Kyoko Tachibana and Fujiwara.

Koizumi claims the 'Agency' consists of only ten members. He has also claimed that several members have infiltrated the school, but none of these have been revealed.

Koizumi told Kyon that Taniguchi is not a member. (Kyon wondered if Taniguchi had been sent to Higuchi to spy on Haruhi.)

Koizumi publicly acts as a subordinate to Sonou Mori, but according to Kyouko Tachibana he actually founded it. 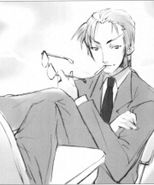