The Disappearance of Haruhi Suzumiya (film)

The Disappearance of Haruhi Suzumiya (涼宮ハルヒの消失 Suzumiya Haruhi no Shōshitsu) is a film based on the fourth Haruhi Suzumiya light novel of the same name. Directed by Tatsuya Ishihara and written by Nagaru Tanigawa, it was released in Japan on February 6th, 2010. The movie has a run time of 162 minutes, the equivalent of 7 episodes.

On December 16, a month after the cultural festival, the SOS Brigade organizes a Christmas hotpot party. Kyon is skeptical of its success, but still helps decorate the clubroom. The next day, Kyon talks to Taniguchi, who announces that he has a date with a girl from Kouyouen planned for the following week.

While walking to school on the morning of December 18, Kyon sees Taniguchi wearing a face mask. Taniguchi claims that he has a cold, denying having the date he mentioned previously. Kyon continues to school, finding that a cold epidemic has suddenly spread around his class. Kyon notices that Haruhi is absent. Ryoko Asakura appears for the afternoon classes and takes her place at the desk behind Kyon, to Kyon's terror since Asakura tried to kill him and he thought she had been relocated to Canada. His classmates, however, believe that Ryoko has always been sitting behind Kyon, and deny the existence of Haruhi Suzumiya in their class.

Confused, Kyon leaves class and tries to find Yuki and Itsuki, but discovers that Itsuki's entire classroom and Yuki have disappeared. On his way back to class, Kyon encounters Mikuru and Tsuruya, who do not remember him and physically fend off his attempts to talk to Mikuru. In a final attempt to find his friends, Kyon goes to the Literature Club room. He finds Yuki, though she is human rather than alien. All of the items kept by the SOS Brigade are missing and the computer is an older model with no SOS files. When Kyon leaves, Yuki asks him to join the Literature Club. Noticing Yuki's shyness and her human manner, Kyon takes the sign-up sheet out of kindness.

When Kyon gets home, he tries to get Shamisen to talk to him the way he did in The Sigh of Haruhi Suzumiya, but to no avail. Disappointed, Kyon goes to sleep.

Kyon returns to the Literature Club room the next day and finds The Fall of Hyperion, which was the same book Yuki used to reveal her true identity in the The Melancholy of Haruhi Suzumiya. Kyon opens the book and finds a bookmark which reads: "Program Run Condition: Collect the keys. Deadline: Two Days Later". Kyon is unsure about the message's significance and decides to accept Yuki's invitation to her apartment. When they arrive, Yuki reveals she has one memory of him: an incident from The Melancholy of Haruhi Suzumiya where he helped her get a library card. However, Yuki remembers him as a random passerby rather than a brigade member. Ryoko Asakura comes to visit Yuki, startling Kyon who tries to back out. Yuki pulls on his sleeve as he attempts to exit. Kyon is moved by Yuki's display of affection and stays. He finds that this Ryoko is just a friendly neighbor who helps Yuki. Kyon still feels uneasy around Ryoko as they leave despite her kindness towards him.

The next day (December 20), Kyon mentions Haruhi to Taniguchi, who recognizes the name. He apparently went to Haruhi's middle school and tells Kyon that she attends Kouyouen. Kyon thanks Taniguchi and leaves school to find Haruhi. He finds both Haruhi and Itsuki, who were walking home after school. Kyon notices that Haruhi has a similar facial expression and demeanor to the one she had before she made the SOS Brigade. Kyon finds Haruhi and tries to speak to her, but she pushes him off as she does not remember him. Kyon then asks her about the incidents at the Tanabata of three years ago, and when she realizes that he knows of all of that, he tells her that he is "John Smith", the alias that he used during the "Bamboo Leaf Rhapsody" incident. Haruhi faints and is caught by Itsuki.

After recovering, Haruhi listens to everything Kyon says about his alternate universe. He tells her about Yuki being an alien, Itsuki being an esper, Mikuru being a time traveler, and Haruhi having strange reality-altering powers. Intrigued, Haruhi decides to gather the former SOS Brigade members and meet them.

Kyon notices that Itsuki is close to Haruhi. Itsuki admits that he has a crush on her, and thinks she is a captivating person. While they travel to North High, Kyon tries to understand what Itsuki sees in her. Itsuki admits that Haruhi has grown bored of him, seemingly only having been interested in him due to his being a transfer student (and therefore "mysterious"). He contrasts this with how Kyon immediately aroused her interest and excitement.

Pretending to be students at North High, they take Mikuru from the Calligraphy Club and bring her to the Literature Club room, where Yuki is already present. Once they enter the room, the computer spontaneously activates and displays a message, revealing that the "keys" alluded to by the bookmark are the five members of the SOS Brigade. The message explains that there is a program in the computer which provides a chance of restoring the world to its original state. However, it cannot be aborted once activated, has no guarantee of success, and will likely result in Kyon dying or being lost in time. Kyon activates it, and finds himself in the Tanabata of three years ago. He finds the older Mikuru, who directs him to Yuki's house. There, Yuki explains that someone altered the world on December 17, changing everyone's memories within one year. She injects nanomachines into Mikuru and Kyon to protect them and provides a weapon to normalize the culprit, which Yuki reveals to be herself. Yuki had altered the world because of "errors", which Kyon later deems to be emotions that she couldn't understand.

Kyon and Mikuru travel to December 18 to witness Yuki warping reality. Kyon reflects on his decision to activate the program and undo the change.

He concedes that the world is a much more interesting place with paranormal being in it and is about to shoot Yuki when Ryoko intervenes, stabbing him in the back. She reveals that Yuki altered her to be Yuki's personal bodyguard, and is accordingly defending her from Kyon. Kyon's vision starts to blur and he becomes delirious with blood loss. Another Yuki catches Ryoko's knife. He sees the younger and the older Mikurus crying over his body. Someone comes up to Kyon and tells him not to worry. Kyon then loses consciousness.

Sometime later, Kyon wakes up in a hospital run by Itsuki's 'Organization', and finds that the world has been normalized. According to Itsuki, after discussing plans for Christmas, Kyon fell down the stairs and entered into a coma. The entire group had been shaken, especially Haruhi, who has stayed with Kyon the whole time he was hospitalized. Kyon looks over to see her asleep in a sleeping bag. She wakes up after Kyon touches her hair, scolding Kyon for scaring her and claiming that it is her duty to look after injured brigade members.

During his final hours at the hospital, Kyon wonders who the mysterious person was, figuring that it was his future self who had time traveled with Mikuru and Yuki. Following his release, Kyon visits Yuki to apologize for causing her emotion induced error. Yuki tells him that her violation is being assessed by the Data Integration Thought Entity because it is afraid she will make further errors. Kyon grabs Yuki's hand and promises that if they decommission Yuki, the SOS Brigade will do whatever it takes to retrieve her. He warns that he would reveal everyone's true identity to Haruhi and let her destroy the Entity. Yuki thanks Kyon and transfers the message.

On Christmas Eve, Kyon considers his duty to go back in time and save himself, but concludes that the world can wait and joins Haruhi's hotpot party.

After the credits roll, Yuki is seen at the public library watching a boy help a girl get a library card. After they leave, Yuki continues reading. 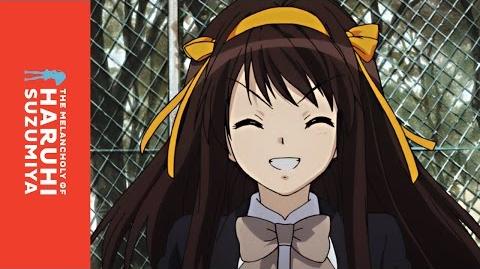 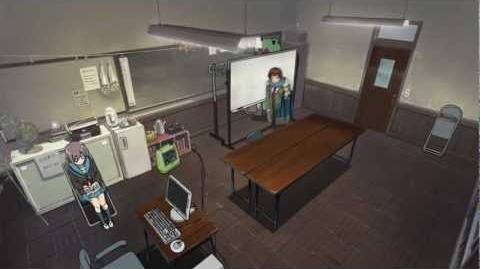 Originally scheduled to screen in 24 theatres across Japan beginning in February 2010, the film continued to accumulate more screenings until it ran in over 100 theatres. Regular screenings lasted until October 2010, over 8 months after the film was originally released. The film earned more than 850 million yen ($10.5 million) in revenue from screenings in Japan.[2]

The film was released on Blu-Ray Disc/DVD, in regular and limited editions on December 18, 2010 in Japan,[4][5] coincidentally occurring on an important date in the story.

The film has been licensed for North America distribution by Bandai Entertainment. English-subtitled screenings began running May 21, 2010.[6] An English-language version will be co-produced by Bang Zoom! Entertainment and released on DVD and Blu-ray in North America on September 20, 2011, while Manga Entertainment will release it in the UK on October 3, 2011.[7][8][9] The film premiered in Europe on October 17, 2010 at the Scotland Loves Anime event in Scotland.[10]

The film has been shown in many countries, including Japan, the United States, Mexico, Taiwan, Hong Kong, South Korea, Scotland, Ukraine, Russia, and Ireland.

Differences from the light novel